Published by University of Hawaii Press, 2015 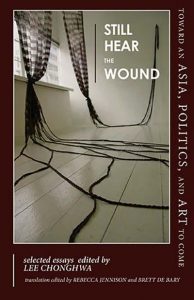 Still Hear the Wound: Towards an Asia, Politics, Art To Come introduces English language readers for the first time to work by an emerging group of critics and artists addressing the legacies of colonial violence in present-day Japan. The volume contains translated essays, and an accompanying DVD with artist interviews selected from Zanshō no oto: ajia, seiji, aato no mirai e, published by Iwanami Shoten in 2009. Editor Lee Chonghwa is known for her poetic and philosophical writings dealing with gender and colonial violence, and with the issue of testimony related to the 1948 Jeju Massacre and former “comfort women.” The essays collected here grow out of her innovative project, “Asia, Politics, Art” (2006–2008), which attempted to reinflect increasingly fraught discussions over Japan’s responsibility for crimes of colonialism so as to include artistic and aesthetic responses to the problem. What new politics, and new modes of political community, might arise from reflecting on the intertwined colonial histories of Korea and Okinawa are questions distinctively posed in this volume. At workshops held at Okinawa’s Sakima Art Museum, situated close to Marine Corps Air Station Futenma (part of the U.S. military infrastructure on Okinawa), Lee highlighted the work of younger artists representing ethnic and sexual minorities in Japan. A performance on DVD by artist Ito Tari deals with “comfort women” abandoned on the battlefield by the retreating Japanese army, while an essay by zainichi playwright Choi Jinseok follows the traces of the unmarked graves of Korean forced laborers who perished in Okinawa, Taiwan, and Japan. Work by critics Ikeuchi Yasuko, Satō Izumi, Shinjō Ikuo, Yano Kumiko, and artists Kinjō Mitsuru, Oh Haji, Takahashi Yūji, Soni Kum, and Yamashiro Chikako are included. The DVD, which also contains an “art documentary” of The Battle of Okinawa by Iri and Toshi Maruki, is ideal for classroom use. |

Afterthoughts, “Afterlife,” on the Occasion of Translation

Words for a Preface: Jindalle/Azaleas or Flowers for Body Offerings Lee Chonghwa, translated by Rebecca Jennison and Yoshida Yutaka

On Not Letting Death Die: A Prefatory Dialogue between Lee Chonghwa and Musician/Composer Takahashi Yūji

1. The Contours of Sound Shinjō Ikuo, translated by Andrew Harding

2. Deaths That Are Not Remembered Satō Izumi, translated by Brett de Bary

3. Among Delicate Remnants: A Tale of Mokuninhama or Shore Connivance Yano Kumiko, translated by Andrew Harding and Ryan Buyco

5. The Angels of History in Okinawa: On Takemine Gō and Higashi Takuma, translated by Inoue Mayumo

7. “Postmemory” in the Work of Oh Haji and Soni Kum Rebecca Jennison