I have been experiencing the visitations of ghost since when I was 14. The visitation came along with the experience of sleep paralysis and out of body experience.

Subconsciously, I was drawn to the theme of numerous deaths of a past century in Korea and Japan and begun to make artworks around that matter. It was a form of ritual to let hovering dead spirits pass onto another realm of the world.

I have been looking for an elixir to cure people from suffering. I found ritual is one of the most powerful forms for healing our being.

At the same time, I was looking for a root cause of social disorder and I found out it has been the work of ghosts, parasitic beings in human presence. Ghosts cannot exist without enslavement of human beings. Thus, ghosts chain people into a cycle of suffering and pain.

As I was proceeding with my research on the theme of massacres from past centuries, an oppressor and a location may change, but the manipulating force has been the same; it is the hungry ghost who needs human energy for their survival.

In Buddhist scripture, hungry ghosts have been depicted as creatures with scrawny necks, small mouths, emaciated limbs and large, bloated, empty bellies. This is the domain of addiction, where we constantly seek something outside ourselves to curb an insatiable yearning for relief or fulfillment (Maté, Gabor, “In the Realm of Hungry Ghosts: Close Encounters with Addiction”, North Atlantic Books, 2010, p.1)

In contrast to the dull moderate pain of the modern urban life of enslavement, hungry ghosts always require fresh and blood of human sacrifice in order to survive.

In past years, wars have taken place everywhere in the world but in modern times such wars are also concealed in another form, in places controlled by human traffic through national border agencies. Urban citizens are warned through terrorism not to cross these borders as well as not to be in touch with it in any form.

In order to awaken the human spirit, meditation is an essential practice to be in touch with our soul and higher consciousness.

Another valid practice for me is ritual.

Ritual has been important element of human life in all societies. One of the key functions of ritual is to transform negative into positive, cleansing human consciousness through communal living and offering.

I suggest an act of “offering” in my performance/ art. If people would offer anything they have to one another, not only for fellow human beings but also for nature, the earth will become a heaven on the earth.

I offer ritual through performance using my body as offering.

As I was doing research to prepare for this exhibition, I saw many movies about and made in Korea in relation to the theme. So many death was involved. Many got hurt.

When I would see much suffering of people, sometimes I don’t know what to do but praying. My art work is a form of prayer for me.

In Hindu rituals, flower, milk, and honey, and sacred water are used to cleanse the sculpture of the deity. In Korean shamanic ritual in Jeju, flour (white powder) is used to conduct a ritual for dead soul. Using these materials, I would like to create a sacred pond with milk, flower, and honey. The pond is consist of flour (white powder)

When the audience would enter the space, they will only see the pond with milk, flower, and flour. 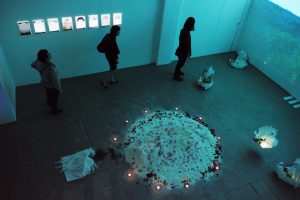 The following text was handed out to the audience.

“Please pour a cup of milk on the stack of flour as your offering.” 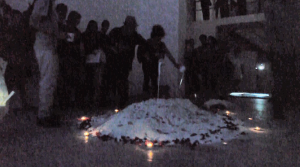 After a while, I will come out from the mountain of flour and begin performance/ dance. 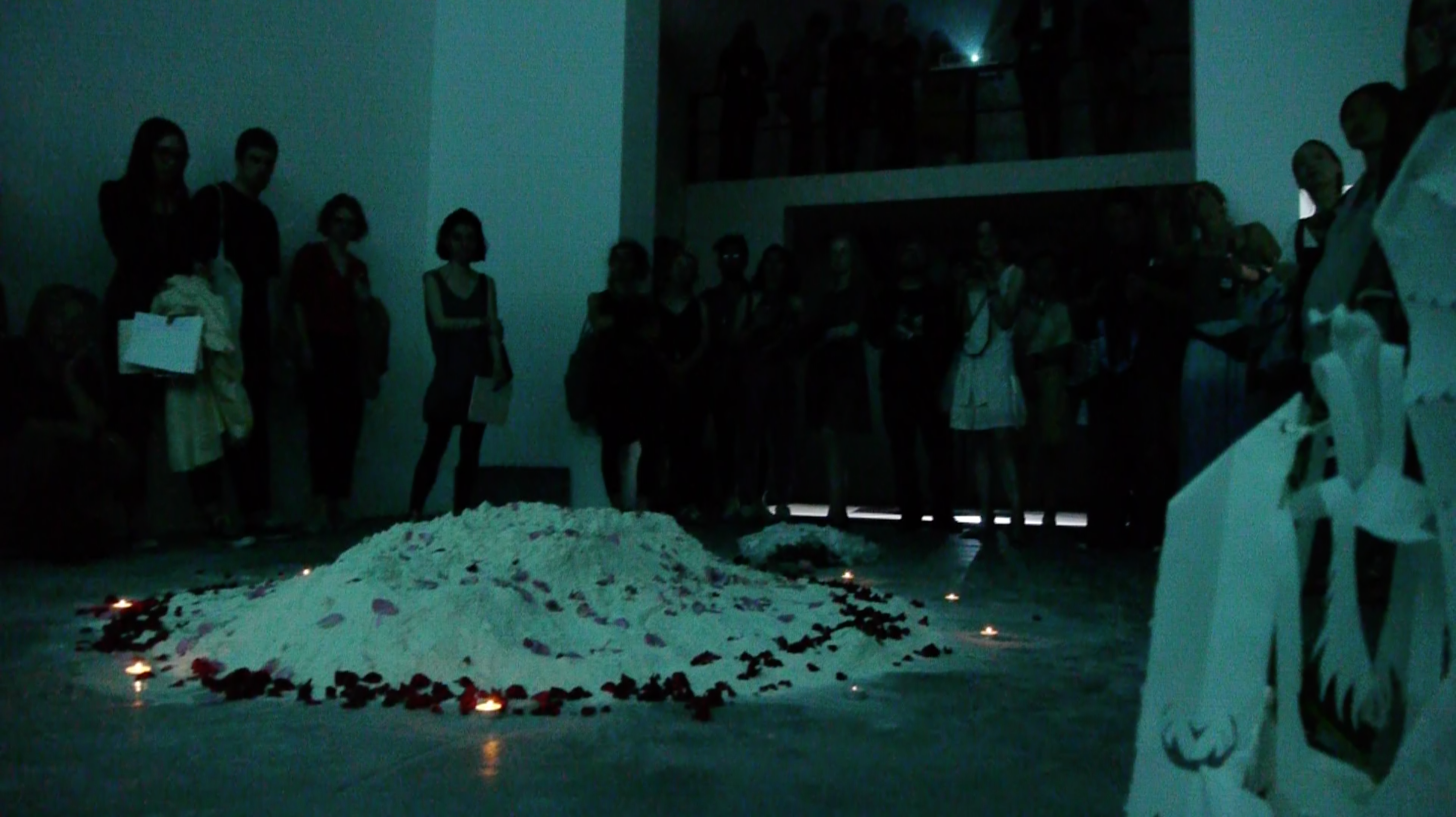 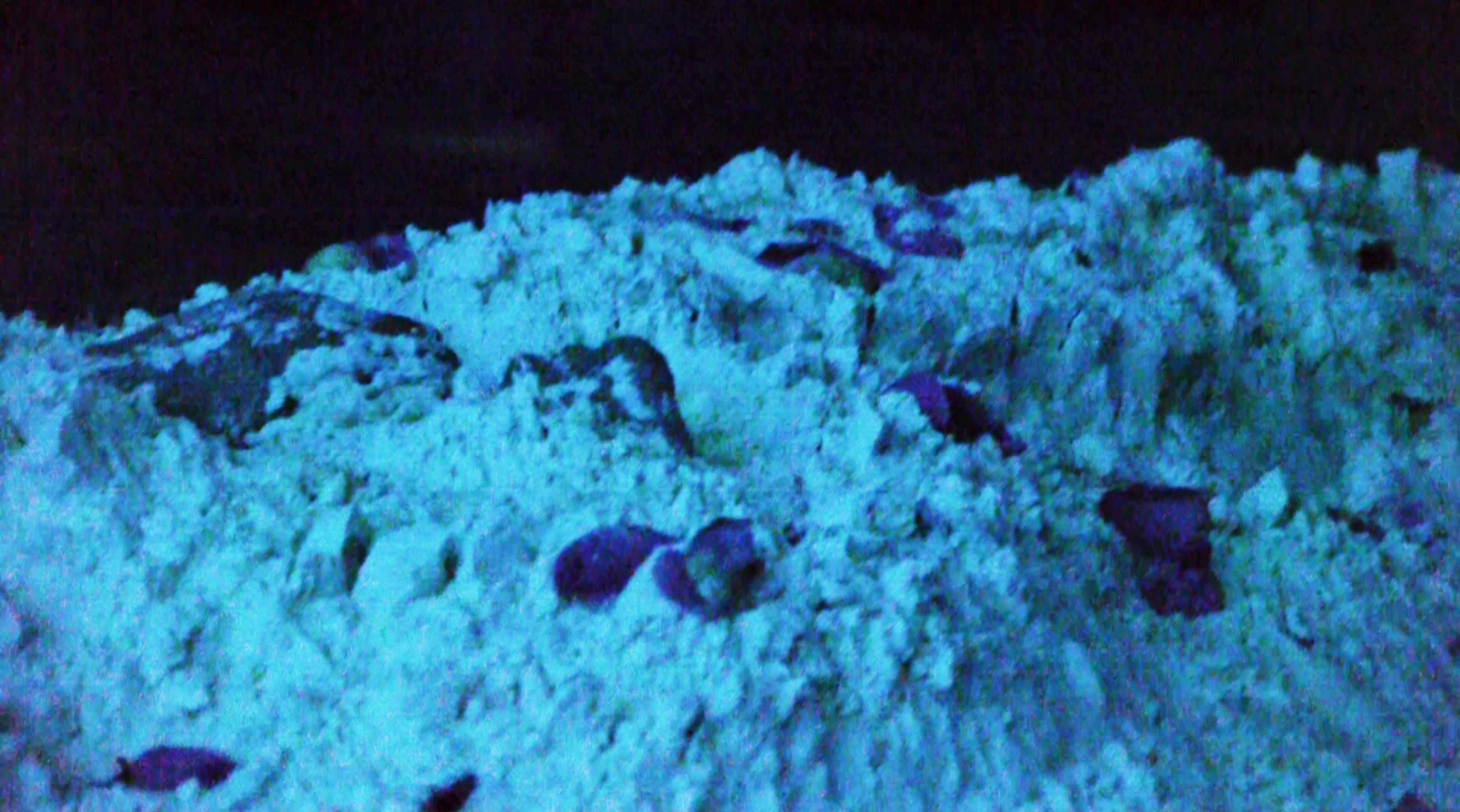