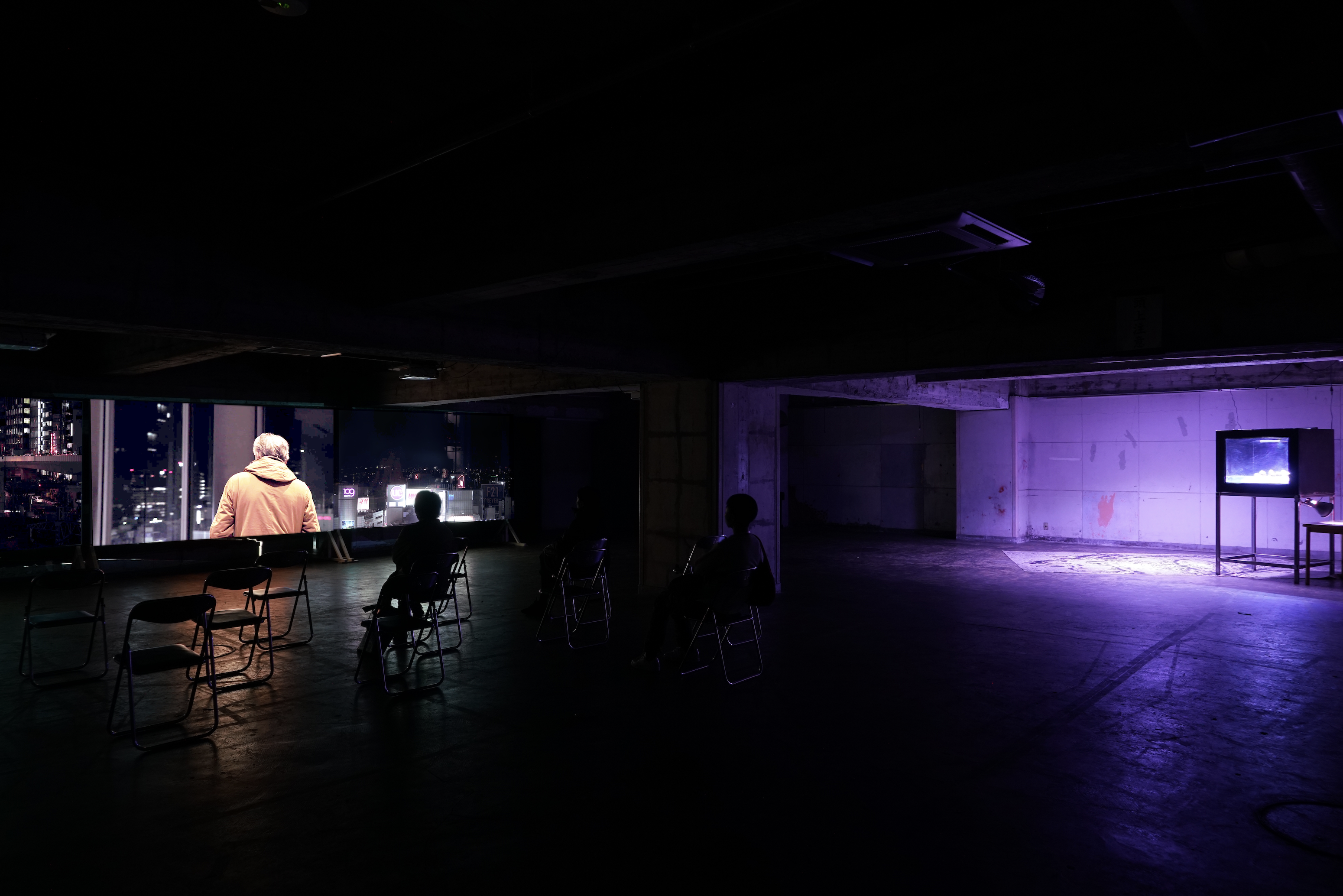 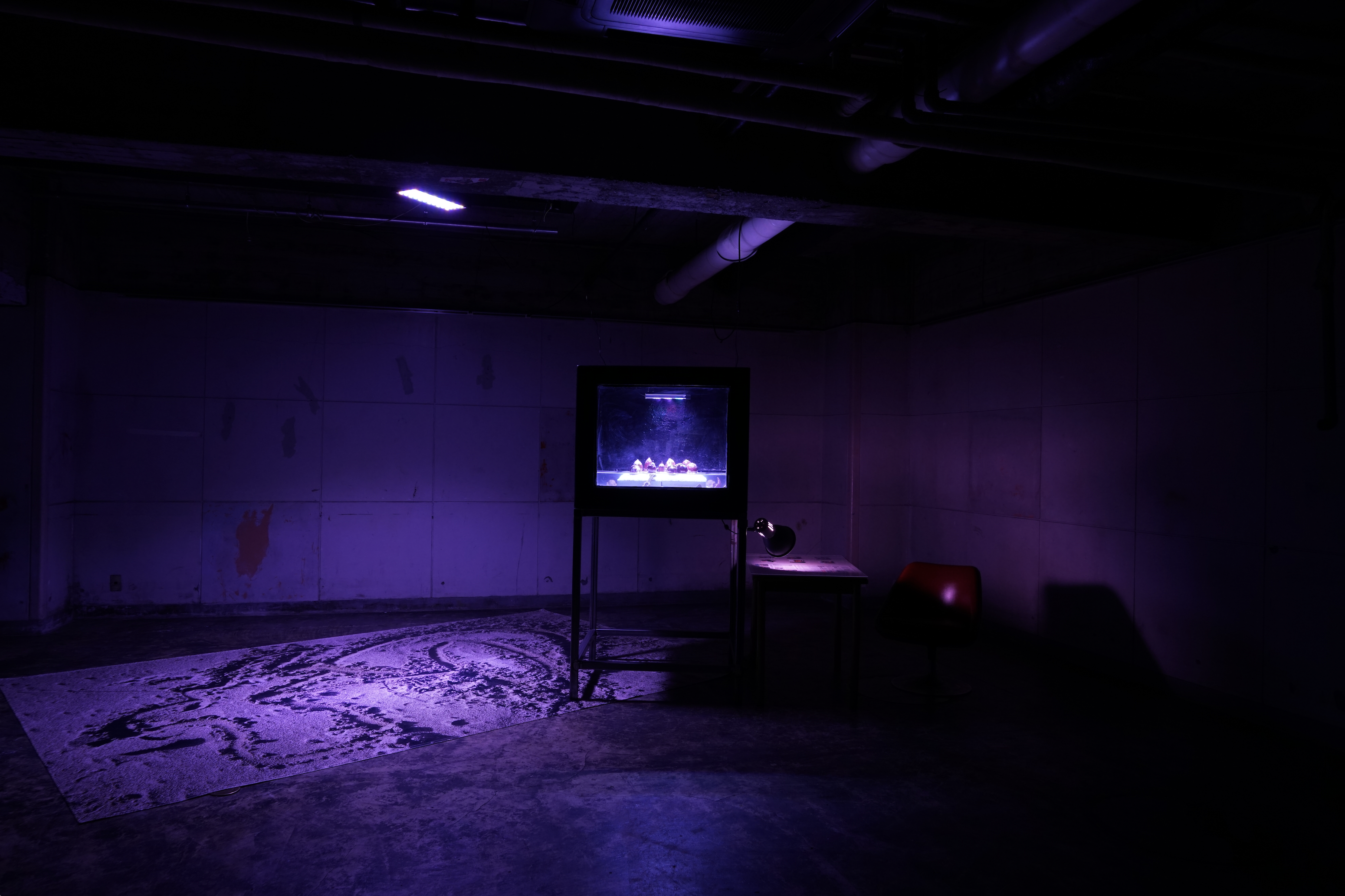 Morning Dew is a collaborative project between artists and former North Korean returnees living in Japan. There are currently around 200 North Korean ex-returnees living in Japan. Many of them are Koreans living in Japan or their descendants who emigrated to North Korea as part of the “Repatriation Project” that took place from the late 1950s to the early 1980s. They believed in the reported fantasy of a “paradise on earth” and emigrated to North Korea. Most of them were Koreans from what is now South Korea. These “returnees” were then forced to live a harsh life in North Korea, which was in the midst of reconstruction from the Korean War. Former “returnees” living in Japan are forced to hide the fact that they have left North Korea. If they do not, they experience difficulties in their daily lives.
The project was initiated from 2019 to 2020 in collaboration with artist Hiroki Yamamoto + Takagawa Kazuya, and Nobuaki Takekawa, and curator Yumiko Okada. With the collaborative effort, we were able to meet 16 ex-returnees or their descendant based in Tokyo and Seoul during the course. Most of them hide their identities and live in Japan secretly. Needless to say, it was the first challenge to find and meet them.

Under these circumstances, each artist attempted to find and meet who are former ‘returnees’ from North Korea living in Japan. Each artist’s work, created through their personal encounters, was presented in the form of an exhibition and a symposium, which opened up a series of discussions.

The title of the project, “Morning Dew”, is a song sung by the South Korean student movement in the 80s, symbolizing the rebirth of something pure and beautiful after a dark night of the soul. 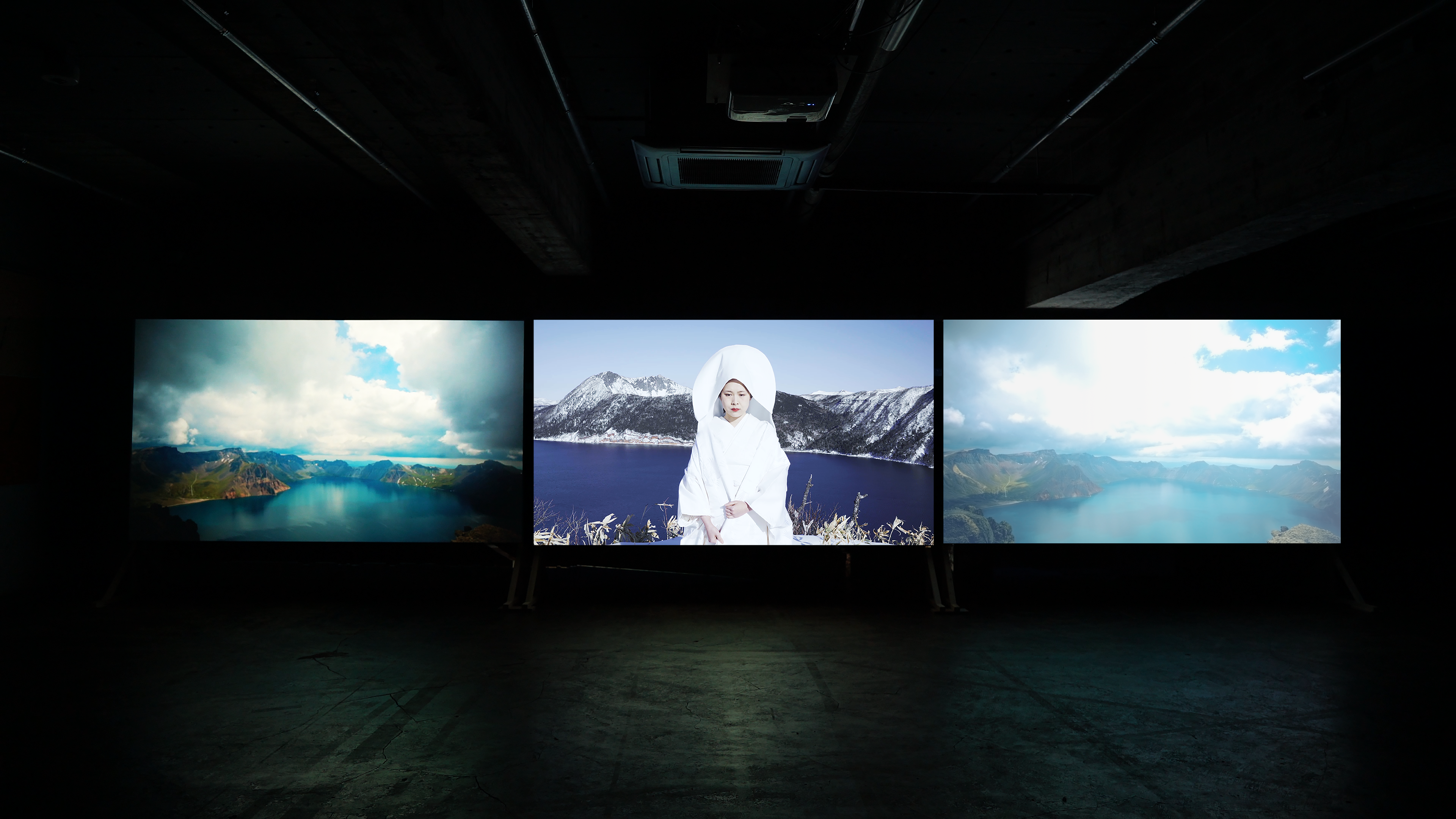 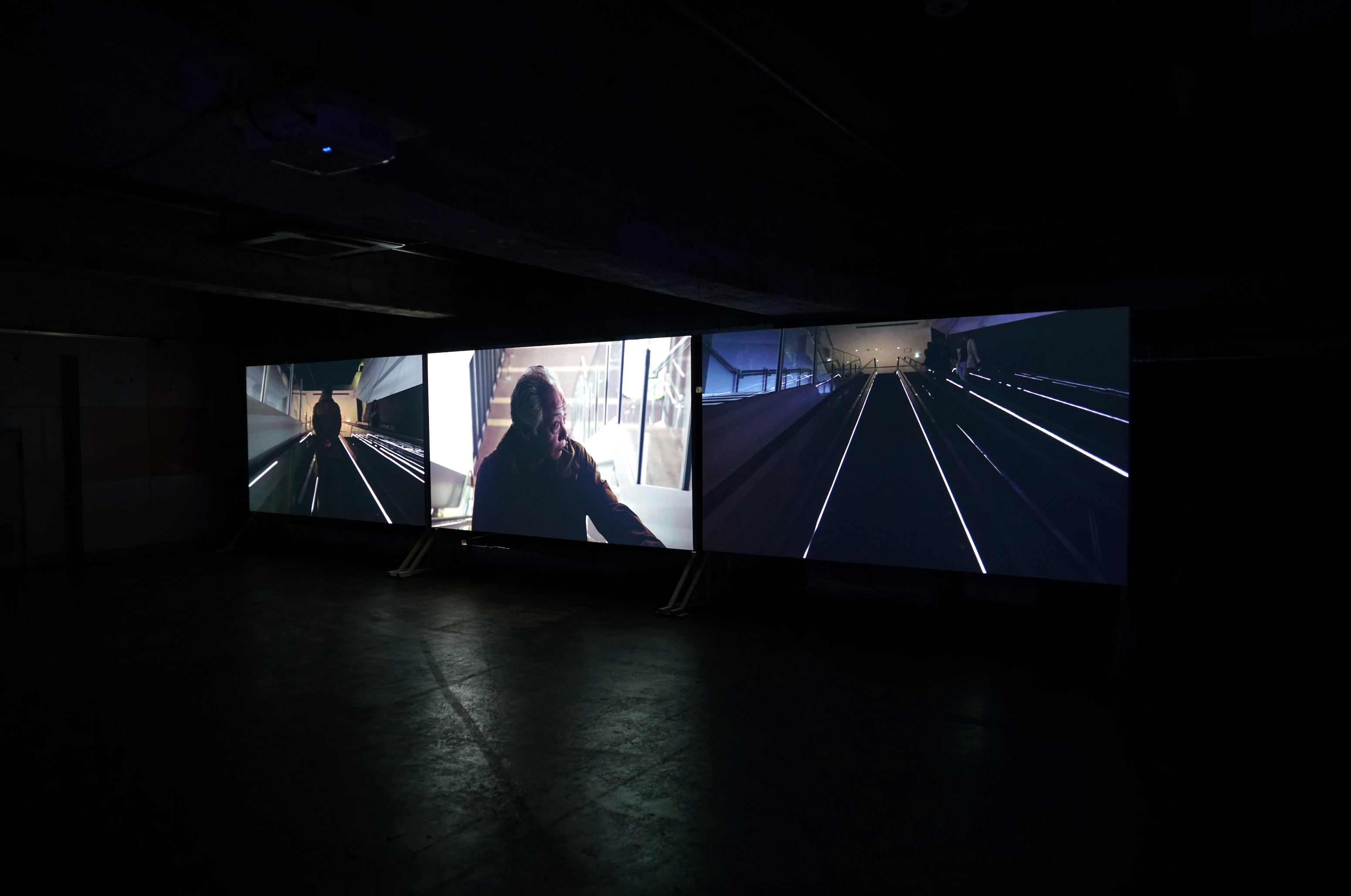 Still images from the video 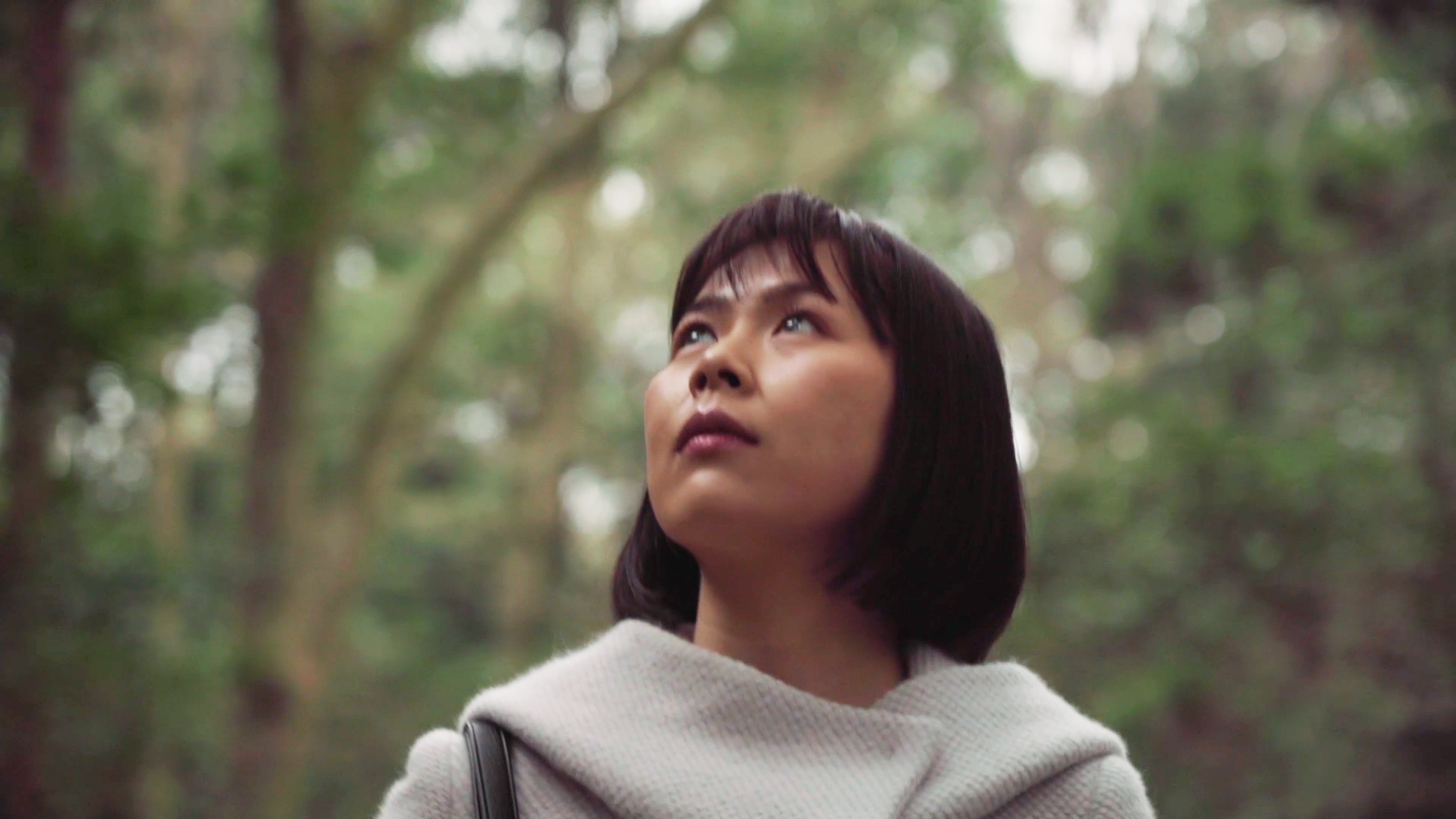 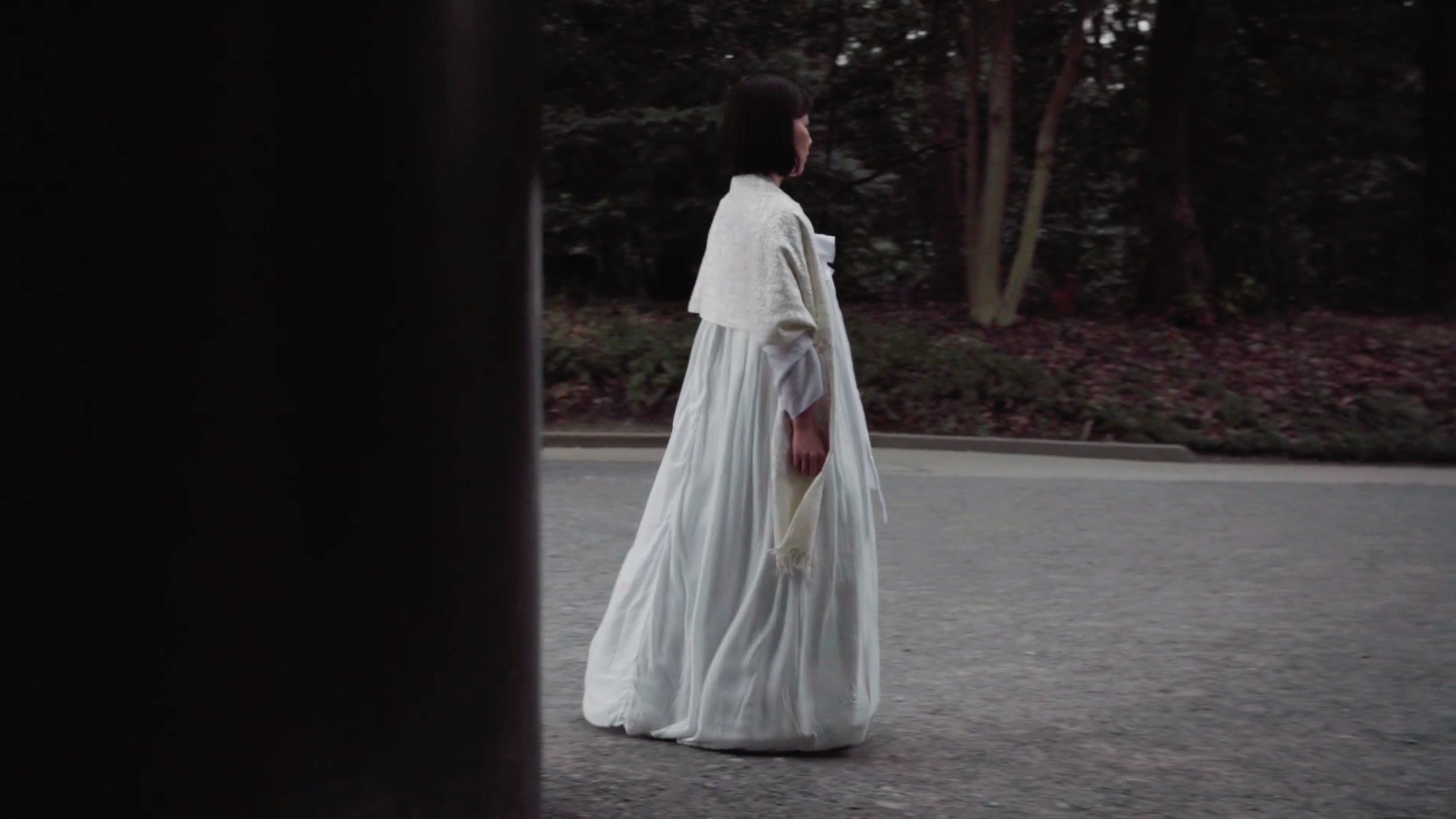 This video work is based on Kum’s experiences with 15 former “returnees” who have defected and are living in Japan, whom she met and interviewed between July 2019 and July 2020. “The ex-returnees” refer to Zainichi Koreans who lived in Japan before emigrating to North Korea.

“The ex-returnees” have no place in the Zainichi community in today’s Japan, and they are afraid that their remaining family members in North Korea might be taken away to internment camps. In addition, they fear that they might be discriminated against if their neighbors or acquaintances knew they were North Korean defectors. Kum faced the predicament that she could not film their faces while making this video work.

In the midst of this aporia, Kum decided to create a video work composed of three screens, using footage from multiple sources, including the live-action scenes with actors, archival materials, footage donated by friends, and footage downloaded from online sources.

Kum doesn’t directly know the people who appear in archive footage. Many of them have probably already passed away. Through collaboration with people across time and space, she wove a poetic video piece, which traces the fragmentary vestiges of violence.

“Someday, instead of my father, I would definitely like to visit Tottori, which my father misses so much. My father told me stories about his memories of playing on the beautiful beaches of Tottori, so everything is etched in the corner of my mind about where to go and what to see. I could tell my father, ‘I went to your hometown, dad!’ How pleased he would be if I could report to him that.“

What is unique about the book, “Defectors” by Shin Mihwa among the research materials Takekawa collected was that it tried to inspire other defectors and related projects by focusing on their “success stories” after their defection, rather than focusing on the painful experiences of defectors from North Korea. He picked up this book when he searched for the books related to “North Korean defectors” in Japan on Amazon and bought several books. It was “unintentionally mixed” with the other books. The Morning Dew Project is a project that focuses on North Korean defectors living in Japan, their Japanese wives, and the repatriation projects. The book “The Defectors” which was “unintentionally mixed” with other books was about defectors in South Korea.

There was only one related story written in the book. In the chapter on Chung Ki-won, a “professional protector of North Korean defectors,” it was mentioned that the grandparents and father of Kim Myung-joo, who was featured as one of the defectors, migrated to North Korea from Tottori in Japan as part of the repatriation project. Takekawa began to think that he would like to start the Morning Dew project by trying to contact Myung-Joo Kim. 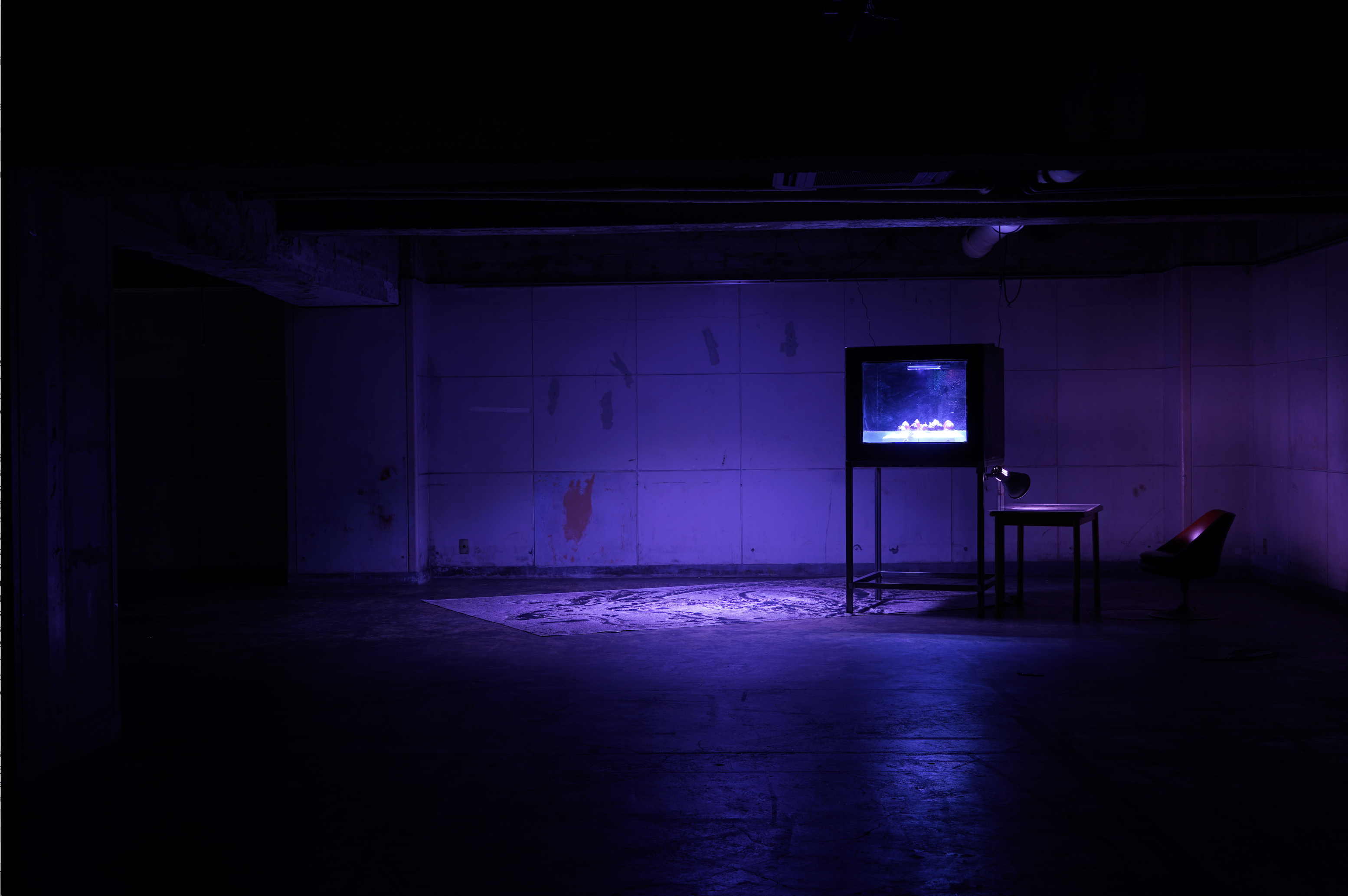 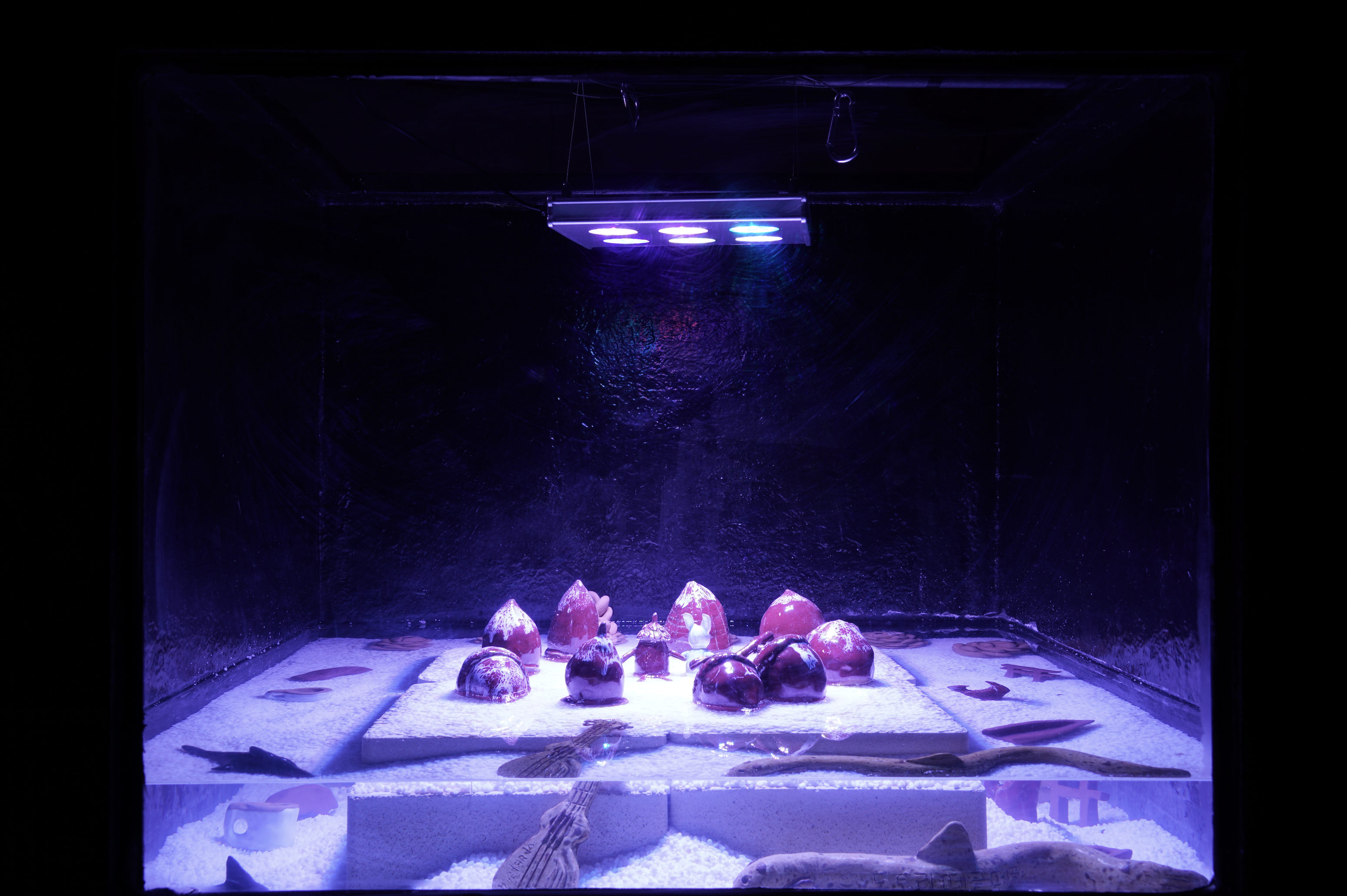 On February 16-20, 2020, Takekawa welcomed four members from South Korea to Tottori Prefecture for a four-night stay to visit various seaside areas as her father’s hometown. During the trip, we learned about the Korean residents in Tottori Prefecture and the repatriation project, as well as the historical exchange between Tottori and the Korean Peninsula. His group somehow shared a warm atmosphere while accepting that her life was torn apart by politics and history.

Kazuwa-yaki pottery, which has been passed down in Kurayoshi City, was once popular as miscellaneous utensils for the common people. Myungjoo Kim’s father may have used it. In the workshop of Kiyoshi Nakamori, the third generation of Kozuwa-yaki potters, she made acorn objects as a gift to her father.
Acorns are called “tottori/ 토토리” in Korean. Takekawa doesn’t know if it was intentional or accidental, but Myungjoo Kim’s father taught his daughter, who was born in North Korea, the song “Donguri Korokoro” (“Rolling acorns”). When Takekawa read the lyrics again, the part “We played together for a while, but I missed the mountain so much that I cried and annoyed acorn” sounded sad.
Takekawa added pottery made in his atelier in Saitama to the locally produced Kamigamiyaki pottery to create an installation as a waterscape, overlapping the pond of “Donguri Korokoro”, the Sea of Japan, and the memories of the trip. The floor is covered with a photograph of a map of the Sea of Japan drawn by Myungjoo Kim on the beach.

by Hiroki Yamamoto and Kazuya Takagawa 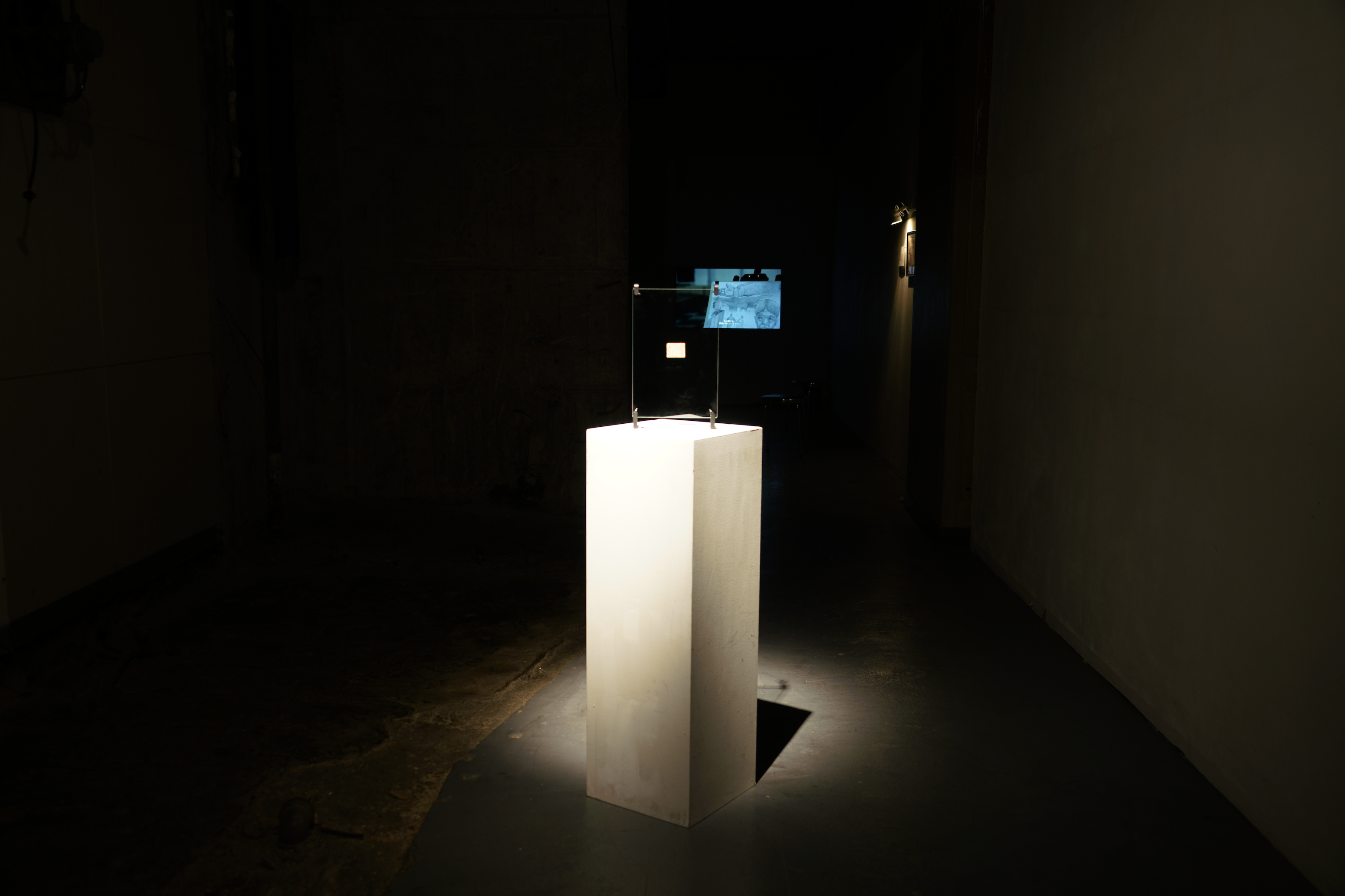 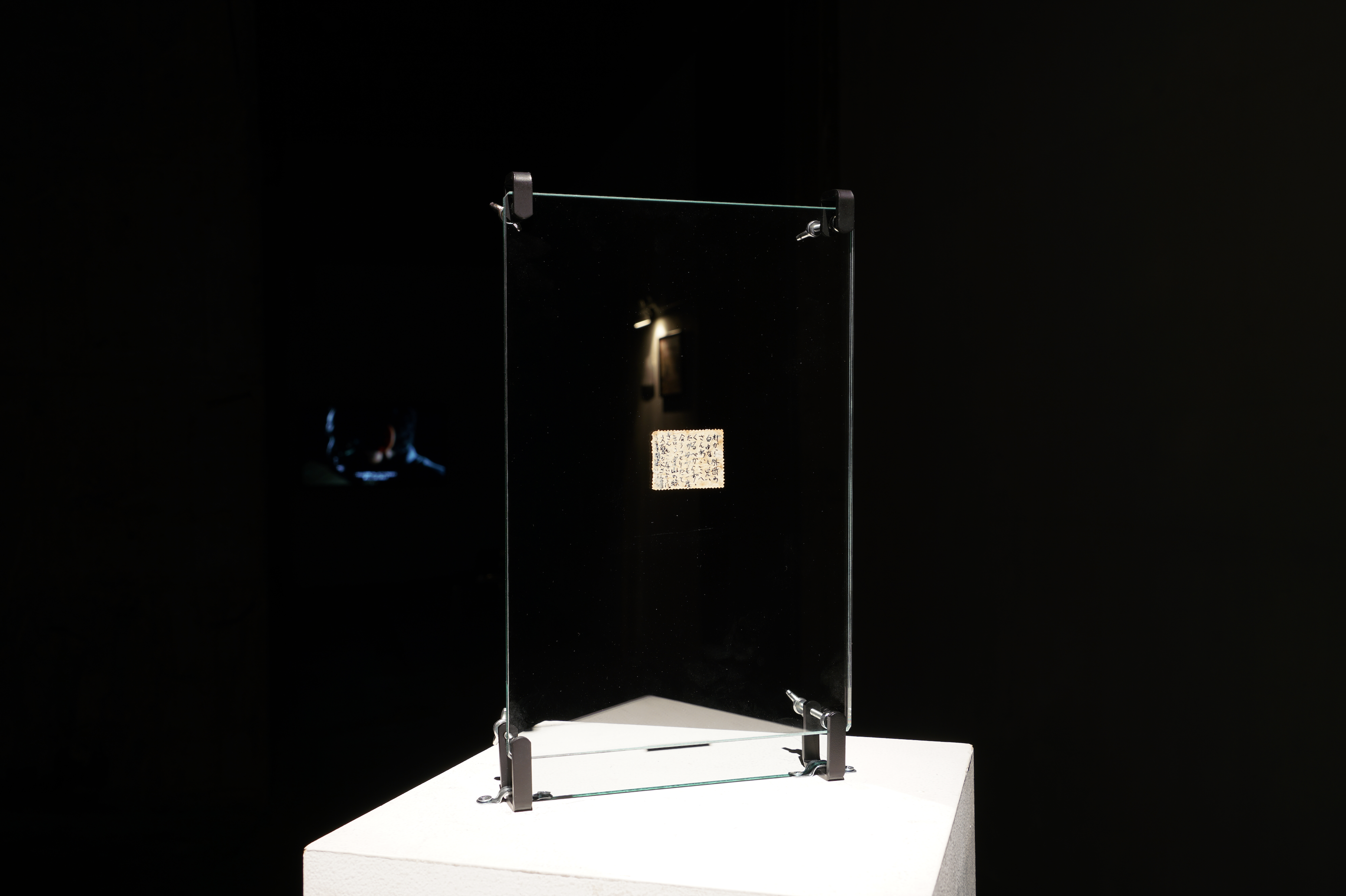 The stamp on the glass plate:

On the back of the stamp on the letter to Kinoshita’s brother, the secret message was written, asking his brother not to come to North Korea because there was no freedom.

In The Poetics of Space, written in 1957, Gaston Bachelard notes, “Every great image has an unfathomable oneiric depth to which the personal past adds special color.” As this imaginative French philosopher put it, the “image” of reality that a person envisions may be intricately intertwined with the “dream” that the person sees. And, within the complicated entanglement, how does the “personal past” can be situated? To what extent can art really be an effective means of unraveling the “Gordian Knot”?

In the fall of 2019, we began interviewing a male former “returnee” from Japan. He “returned” to North Korea in the 1970s and “defected” to Japan around 2010. The interview went smoothly, as we asked about life in North Korea and the circumstances of his defection, but then we suddenly encountered a situation that made us greatly perplexed. During the interview, in a response to a casual question I posed as a kind of an “ice break,” the man began to speak suddenly and awkwardly. The question was quite simple: “tell us about an impressive dream you had in North Korea. The content of the dream that he told us was so unusual that it was difficult to tell where the dream began and where the reality began.

We decided to delve into his dream as deeply as we could. How is it connected to the realities of postwar Japan and North Korea, which he experienced firsthand? Or are they disconnected? Was the image of a “democratic nation” that Japan dreamed of after the war, or the image of “Heaven on Earth” that North Korea dreamed of following the division of North and South due to the Korean War, part of the strange – at least they seem to be so to us – dreams of men? And how does “History” (if there is such a thing) capture his existence in a constrained manner?

Can a dream be a “testimony” to reality? But if reality and dreams form an intertwining entanglement, why can’t dreams testify to reality (or at least some of its phases)? In the first place, is there a clear-cut boundary between dream and reality?

Finally, what do all of these attempts throw back at us?